It’s no secret that Project Amazon includes the addition of two other rides. Stated as being children’s rides, we delve a little deeper into the plans. Looking into what type of ride we could be looking at as part of the new Amazon Land coming to Chessington.

Planning of course began in May 2021. The consultation period indicated that the park was planning to add two other rides. When planning permission was sought after in August, we got to see a little more detail around the planned new area. As well as the planned children’s rides set to open in 2023.

Flat Ride A is set to be located on the Western side of the new land. Sporting a circular shape in the plans, with the queue-line designed to wrap around the perimeter of the new ride.

As with the planned new roller coaster. The plans do not indicate any particular manufacturer or detailed ride model. They do however give us enough to make a good prediction about who the ride will be made by. As well as the potential model. Therefore, giving us an indication as to the level of thrills we are expecting.

Following the success of Croc Drop. We are expecting that Flat Ride A is manufactured by SBF Visa. It is thought that Chessington has partnered up with the Italian company on both of the two new flat rides for the area.

Chessington Buzz is expecting that the new Flat Ride A will be a Super Jumper ride. Built by SBF Visa, the Super Jumper is a round flat ride with a series of bouncing arms. Guests sit in groups of 3 on the end of the arms and are thrust into the air. The ride also rotates round on a central hub.

The Super Jumper is a family thrill ride. Giving guests above 1.1m an opportunity to experience a different type of thrill. Very different to other rides in the park, the ride also has the ability to travel both forwards and backwards. Giving guests an unpredictable ride.

It may look similar to that of Flying Jumbo’s, but the ride is certainly more intense. Travelling much faster and bouncing higher. The ride would be a fantastic addition to the new Amazon Land area. Adding a touch of family thrill to Chessington’s line up. 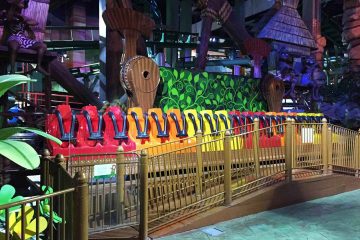 Following on from our look at the other new children’s ride as part of Project Amazon. It’s now time for us to take a closer look into the plans for Flat Ride B. One of Read more… 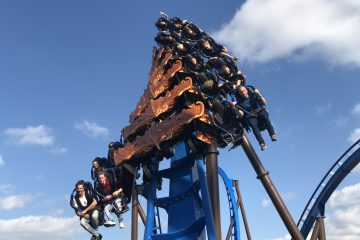 It has been seventeen years since Chessington World of Adventures Resort last opened a new roller coaster. In 2004 alongside the Land of the Dragons, the park unveiled Dragon’s Fury. Now, planning permission has been Read more…